“If you start to feel good during an ultra, don’t worry, you will get over it.”

As runners, we’re more than familiar with this quote.

Right when we think we’ve nailed down our training, something comes along and reminds us that we weren’t even close.

Since the time I began running, I’ve made hundreds of mistakes.

Most of them had people looking at me and asking, “Why did you think that was a good idea?”

The rest were just mistakes I hid from them, therefore not allowing them to ask me the question.

But, these mistakes made me the runner I am. I learned from them, adjusted, then tried something new. Then this process repeats endlessly.

Over the time I’ve ran, I’ve had multiple running-related questions from people. Some are easy to answer, some aren’t.

But, I think as a beginning runner, there are certain lessons that will help you get started in a safe way.

Below are the lessons I’ve learned that I think can benefit all runners. So, without further ado, let’s hop into them.

The most important lesson.

Most runners, including myself, run far too hard on most of our runs. And it would benefit a lot of us if we just slowed down.

When I started running, I would go out every day, knowing I wanted to run at a certain pace.

This led to me just crushing myself on runs.

I would make it to about four miles before I started feeling the fatigue. If I made it to six miles, I’d be crushed and probably couldn’t run back to my house.

Ultimately, this led to me picking up an injury and having to tone back my running.

Tell me if what I said above sounds familiar because I bet many runners did the same as me.

That’s not to be critical. You don’t know what you don’t know, and when you’re fed information telling you how you should run, then that’s how you run.

I was surrounded by people who would tell me that the only way to get faster is to run at the pace I want to race at, as often as I can.

And the added pressure of seeing people’s big runs on Strava doesn’t help.

Leave all that, and focus on yourself.

While higher-paced/higher intensity running during training may work for some people, I would argue it doesn’t work for most people.

In fact, it’s not even how elite runners train.

There have been multiple studies that point to a slower, more easy-moderate pace training style.

This is true for endurance activities, period.

It wasn’t until I started researching running and endurance training that I learned differently, and it’s vastly improved how fast I am, how fatigued I am after a workout, and how often I’m able to run.

— Shawn Bearden, Ph.D. — Host of the Science of Ultra podcast

Let’s view running from the scope of money.

Nothing about running is a “get-rich-quick” scheme.

You will rarely see great improvements over a short amount of time.

Running, in fact, is like depositing a little into a savings account. Those little investments add up — and they really show themselves after years of deposits.

So don’t worry about speed.

Just get out, and run, as often as you can, at a pace that you can sustain.

I always refer to the conversation principle. If you wouldn’t be able to have a conversation with someone running with you because you’re breathing too heavily, then you’re running too fast.

The speed increases will come, but it’s only going to come with the consistency of putting those running shoes on every week.

Those repeated deposits into your running bank account will account for something if you simply give them time to accumulate.

Heart-rate training will have its own limitations.

However, if you’re starting out and looking to ease yourself into running without getting injured, it’s not a bad method to adop.

I know everyone loves those videos of runners effortlessly gliding up mountains, looking as if they’re expending no energy as they skip from rock to rock.

Trust me, I love them, too.

However, that’s not the reality for the vast majority of runners.

At a point, it is less efficient to continue running up a hill. You have to consider how much energy is being used and the speed gain that is being taken from that.

In most cases, saving energy will prove useful by choosing to hike.

Kilian Jornet, a god of ultrarunning, pointed this out himself while watching the Dolomyths Run in 2019.

This podcast on hiking with Ian Sharman, whose exploits speak for themselves, gives a lot of valuable insight into hiking’s efficiency and how you can improve your hiking.

However, don’t fall victim to the idea that you need to hike every hill.

Varying your efforts on hills will help give you the adaptations your body needs to become more efficient at climbing.

Guage your effort, then make an educated decision on if you should run the hill or not.

If you’re running up a hill with a significant grade, and you’re noticing your effort is high, then switch to hiking.

Your heart rate will come down, your legs will get a much needed break, and you’ll see the dividends in the long run (pun intended).

Try picking up a pair of hiking poles if you’re someone who struggles with ascents. They’re not for everyone, but it’s always good to experiment and see what works fo royu.

If you want to improve your hiking with training, then you can check out Ian Sharman’s approach.

Okay, maybe gummy bears aren’t the perfect replacement for Gu, but the message is still there.

We can find nutrition for our runs/races all around us if we just look.

Instead of falling for the fancy advertising and the popular choices, like Gu, Honey Stinger, Gatorade, etc., try using natural foods.

This is going to be entirely personal.

If you like Gu or an equivalent, and it’s working for you, then continue using it. I will always abide by the “if it ain’t broke, don’t fix it” policy.

However, I never quite felt good from energy gels or chews. I might feel a brief boost, but the GI discomfort I feel after taking one has me looking elsewhere for energy.

Ultimately, however, it’s important to take in calories, and especially carbohydrates, during a run.

This helps reduce the breakdown occurring while running, while also speeding up the time for recovery.

Things that your body is used to digesting will always help you in a race.

Think of simple carbohydrates that are easy for your body to break down.

Most importantly, experiment with your nutrition on training runs before the day of your race.

There’s nothing worse than finding out that the “energy” you just took in the middle of your 50K is actually going to have the opposite effect it’s supposed to — just trust me on this one.

This one may be down here at number four, but it’s critically important.

Allow your body to warm up into your workout before you start pushing it. It will help you feel better, gain more, and ultimately allow you to reap the total benefits of your run.

The warmup doesn’t have to super in-depth, but anything is going to be better than what you’re doing now if you’re skipping it altogether.

There are a whole host of reasons to do a warmup, but most important for runners is the prevention of injury.

Your warmups do not have to take a lot of time.

Here’s what I do.

After this, I will walk for the first five minutes of my run.

All of this will take about eight minutes, and it has made my legs feel “in” the run much faster.

An additional tip would be to include a cool down as well.

I simply make this the last five minutes of my run, and I walk to give my body some time to wind down.

This was said by the great, and previously quoted, Shawn Bearden, Ph.D.

I know I mentioned it above, but I can’t stress it enough. The Science of Ultra podcast is a gold mine if you are interested in learning more about running and adapting your training to get the most out of your meat vehicle.

It ultimately boils down to this, the best indicator of success in running is mileage run.

If you want to get better, run more. Simple as that.

It’s not running more intervals, not the different fartlek workouts, or even incorporating strength training.

It’s not that these things don’t help, there are definitely places for them in training.

They just are not as important as getting out and running progressively more.

I don’t like general rules when it comes to things, but the 10% rule isn’t a bad metric to follow.

The rule says to increase your mileage by 10% over the previous week. Stick around this, and you’ll be in a good spot.

In addition, you can increase the number of days that you run.

Try easing an extra day in first, but keep your mileage the same as it would be.

For instance, if you run 12 miles (20 km), three days a week, try running four days a week, with around the same mileage the next week. Then increase from there.

Lastly, you can also try two-a-days.

Many elite runners will use these to increase mileage. However, you don’t have to be an elite runner to benefit.

When done right, two-a-days can have a great effect on your endurance.

Let’s be real here. How many of us are consistently getting enough sleep each night?

I know many will say, “But I operate great off (insert number of hours here). I don’t need more!”

If that number is less than seven, then you’re probably not performing as efficiently as you may think.

Sleep is consistently one of the most overlooked aspects of training or just health in general.

Sleep has been shown to be a crucial part of recovery. To make this easy, let’s list some of the things that better sleep is associated with:

Getting proper sleep as an athlete is vitally important to continue to progress and maintain a proper level of training.

And these are just the benefits for athletic performance. The benefits in day-to-day life are even greater.

The message here is to stop skimping on sleep (I’m looking at myself here).

Running regularly is already hard enough on your body, we can give our body a much-needed break by just fitting in a little more time between the sheets.

The most surefire way to improve sleep is to improve your sleep hygiene habits.

Generally speaking, though, the following are good steps to take:

These are just a few of the things that can help you get better sleep and, in turn, recover faster.

So, there it is. The sage advice that came from a wise old man who, even at his old age, is beyond his years in wisdom. If only that were true.

I make decisions I may end up paying for later.

But, that’s a part of the process of developing as a runner.

I hope that I’ve helped some runners in some way. Even if it’s only getting you to try gummy bears on your next run (they are fantastic, by the way), I’ll still feel I succeeded.

Let me know if any of this helped and what you liked/disliked about this article in the comments! 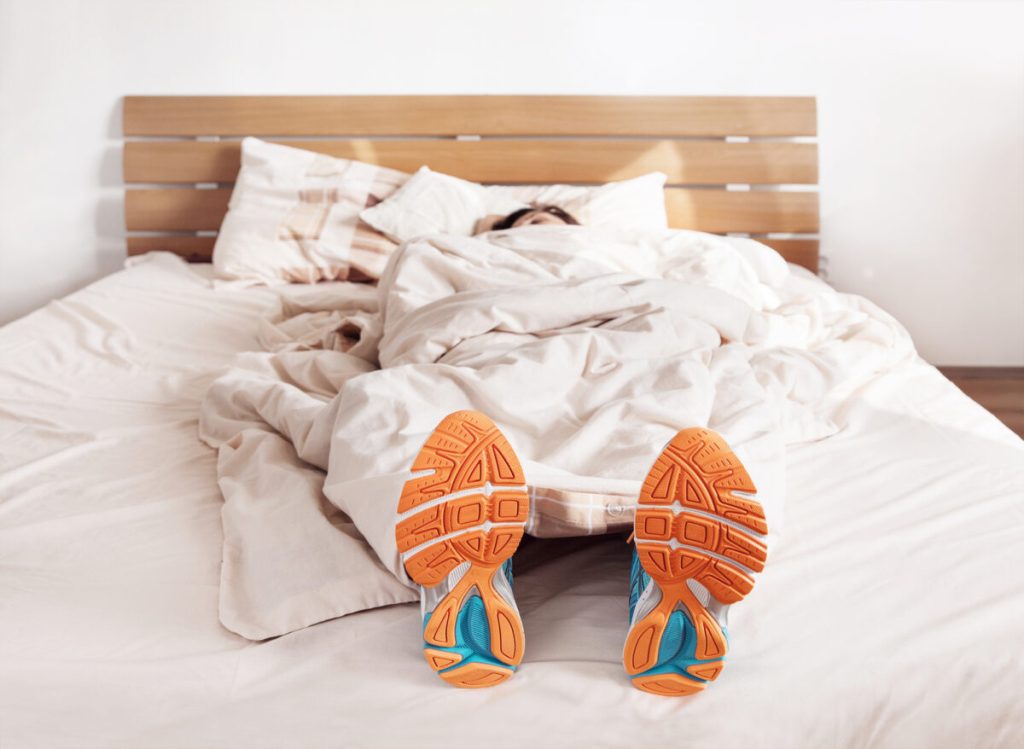 6 thoughts on “6 Essential Lessons for a Trail Runner”